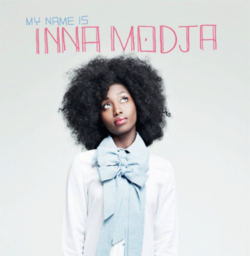 The first two words that come to mind when thinking of Inna Modja are music and fashion. Her Facebook photo is a drawing that depicts her Vogue cover, in a comic-style version, with the words: “Inna Modja loves Vogue Africa. Pairs Fashion 2010.”

Profession and passion make up the original that this singer from Mali is known for — she’s also a songwriter and fashion blogger and her music is beloved for its mix of folk and sweet sounds, and her blog, Rock’n Love, addresses fashion, beauty and music.

Her first album, Everyday is a New World was released in October of 2009 and already her first video, Mr. H, showed all the characteristics of a Pop princess. Musically, she cites Salif Keitaas her inspiration the world-famous musician with whom she collaborated before embarking on her career as a sololist.

Born in Mali, and before settling in Paris, she’s lived in Nigeria, in the United States and Togo. In France, her cover version of the 1988 hit, “Life” by Des’ree was all over the airwaves last year, and Inna has become an icon of style. Fresh, eclectic and exotic, in both her style and music: Inna is both Rock and Love.