Bola Agbaje born (June 1981) is an award winning playwright and screenwriter. Bola has been writing since (2006) and has had plays presented at the Royal Court Theatre, Tricycle Theatre and Albany Theatre to name a few. Bola’s plays address issues of youth identity, stereotypes and culture. 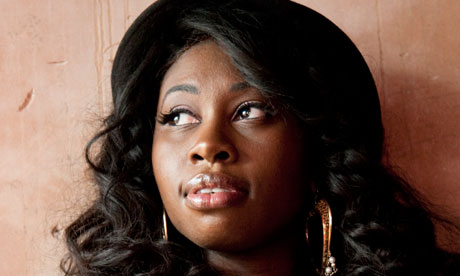 Photograph: Ibbolya Feher for the Guardian

Bola won the (2008) Outstanding achievement in an Affiliated Theatre Laurence Olivier Award for her first play Gone too Far (2007). In (2010) Bola also won the Women of the Future Award in the Arts and Culture category at Women of the Future Award in association with Shell. Best Playwright at the African Film Awards and the Red Magazine Red’s Hot Women to watch in the Red’s Hot Women Awards.

Bola Agbaje was born in St Thomas Hospital London to an African family. Her Nigerian mother Sikirat Agbaje is a cook in a local school and her Nigerian father Olakunle Agbaje is a civil servant for a local council. Bola spent her childhood living on the North Peckham Estate in south East London. At the age of six Bola’s father decided to relocate back to Nigeria. Bola and her younger brother went along where they met their two elder siblings. Bola briefly lived in Nigeria for two years and returned to England at the age of eight. Throughout her childhood Bola had a tough time coming to terms with her identity. ‘I didn’t know if I was African or British. In England I was called African, in Nigeria a black girl with an English accent I was called British and when I returned to England with an African accent I was called African. I was so confused for a very long time.’ This confusion continued into Bola’s teens where she also recounts her first day in secondary school. ‘I went around the classroom asking everyone where they were from and when I was asked I told my class mates I was half Jamaican and half African. Thinking back I don’t know why I did it, I mean I know why at the time, I was ashamed of being African most African where I grew up were ashamed. It was cooler to be West Indian. Looking back its funny I told such a dumb lie, I was so naive because I was gonna be with these same people for five years so eventually they would have found out I wasn’t Jamaican, which was the case.’ Bola explains it took her a number of years to be comfortable with being Nigerian and it was at college where she met a vast number of second generation Nigerian/Africans that she was proud of her roots. ‘Most people at college were Nigerian or African and in the common room we would all sit and share stories about our parents and family. We would joke about how we were once embarrassed our parents had African accents but now we were going around talking with African accents.’

Bola believes this discovery is what lead to her writing her first play Gone too Far – a play that explores youth identity and culture. Bola Agbaje’s original dreams was to be an actor. She attended a part time drama school called Identity Drama school in East London from (2004-2006). However Bola had a change of heart frustrated with the lack of roles for young black actors. In (2006) Bola quit Identity Drama school and enrolled in the Royal Court Theatre ‘Critical Mass’ Young Writers Programme. A ten week playwrighting course. It was at the young writers group that Bola developed her first play Gone too Far.

Gone too Far was selected as one of two plays to have a full production during the Young Writers Festival (2007). Bola recalls the shock and excitement that her play was selected out of 400 plays. ‘I wrote the play because I was tired and frustrated. I wanted to write a play about my experiences. I wanted the characters to have African names. I felt I was not represented. I know over 20 Bola but not once on screen or on stage have I seen a play or film with my name. I was sure most second generation immigrants felt this way, so instead of complaining I thought I’d take a stand.’

After the success of Gone too Far Bola was commissioned by various theatre to write plays. In (2008) Gone too Far was revived in the Royal Court theatre downstair playing to a 400 seated audience per night and it went on tour to the Hackney Empire and Albany theatre. In the same year Bola was nominated for the Evening Standard Most promising playwright award. This however went to Terrell Alvin McCraney.

In 2009 Bola was commissioned by the Tricycle Theatre alongside playwrights Roy Williams and Kwame Kwei-Armah to write a play for the Not Black or White season. She also worked with a young Director John Dayo to write and produce three short films for Day Zero productions. The last Piece a short film written by both Bola and John won the runner up prize for best narrative at the Bablegum Online Film Festival.

In 2010 Bola second play for the Royal Court Theatre – Off the Endz saw a successful run in the theatre downstair. She also wrote a short play Playing the Game for the Tricycle Theatre Women, Power and Politics season. Bola is under commission with Paines Plough, Tiata Fahodzi and 20 Stories high.

Bola Agbaje is currently working with UK Film Council and a production company Poisson Rouge in developing her first feature film a screen adaptation of her play Gone too Far. Bola completed this film script in 2010 and worked with a young director Destiny Ekaragha in producing a 6 min pilot for the film. The screenplay has been sent out to various distribution companies.