On Saturday, September 26, 2015, 48-year-old MS survivor and entrepreneur Lucie B won the 2015 Arnold Schwarzenegger World Jump Rope Championship in Madrid, Spain. Representing both the USA and Sweden, she was awarded 1 Silver and 4 Gold Medals. 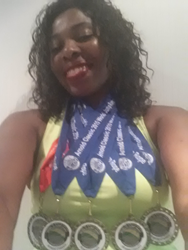 Never Allow Perceived Limitations to Limit Your Potential for Greatness N’ Success. Believe in Yourself and Go For it!

On Saturday, September 26, 2015, 48-year-old MS survivor and entrepreneur Lucie B won the 2015 Arnold Schwarzenegger World Jump Rope Championship in Madrid, Spain. Representing both the USA and Sweden in the Speed and Power events, which consisted of 30-Second Single Rope Speed Sprints, One-Minute Double Unders and One-Minute Am Front Crosses, she was awarded 1 Silver and 4 Gold Medals.

“I remember looking at my competitors and saying to myself, ‘Why are you here? This is crazy!” says Lucie. “I thought, ‘you are three times older, five times slower, ten times heavier and have MS! What if your legs buckle? What if you fall? Just pull out of the competition now.” Lucie B was diagnosed with MS in 2007 and told she would probably be living the rest of her life from a wheelchair within a year of the diagnosis. However, after eight years, Lucie B is still going strong. “I’m still standing, still jumping, still competing and winning,” she says. “I put into action ‘mind-over-body’ to beat MS at its war with my well-being. Winning in Madrid is proof to all that the impossible is possible!”

In 2004, Lucie walked away from a career in medicine to become a professional jump roper and entrepreneur. “I wanted to create something new, fresh, and exciting that could positively affect the lives of children,” says Lucie. “Hence the creation of the Lucie B Jump ‘N’ Fun Jump Rope Gym for Kids. It is a place where kids are happy and encouraged to be creative and inventive while exercising and learning new jump rope skills; where kids’ self-confidence can blossom and where children are Number One!” Lucie pays special attention to girls in the program, because many have negative body images and would look to her for inspiration and motivation.

“I wanted to be a role model,” she says. “An example of strength, power, and fearlessness. My greatest mission is to help girls love themselves and their bodies. The media, unfortunately, portrays thin as ‘In’ and anything else as ‘Out.’ I wanted to be an example to my students that fitness and strength comes in many different shapes and sizes. I helped many girls embrace themselves as they were. Every girl went home with Lucie B Homework which was to look in the mirror and say, ‘I am beautiful, I am strong and I can do anything.’”

In 2013, the Lucie B Jump ‘N’ Fun Gym was part of the after-school programs in Swedish schools such as FuturaSkolan, Carlssons Skola and Campis Manilla. In November 2014, Jump Rope made front page news in Ostermalmsnytt and was featured on Lilla Sportspegeln | SVT. “Team Sweedee Pies is the name of my jump rope team in Stockholm,” says Lucie “and the goal is to transform these dynamite Swedes into jump rope champions like my team in New York City: The Rock-It-Ropers.”

Lucie B says that the ultimate goal is to have Lucie B Jump Rope programs in all public and private schools in New York, Stockholm, and the Caribbean Islands. “I am currently working on a new program to empower girls to be Fit, Fierce, Fabulous and Phenomenal,” states Lucie. “Winning the Championship in Madrid is a testament that being Fit, Fierce, Fabulous and Phenomenal can lead to great success!”