How to Conduct a Successful Crowdfunding Campaign

In the aftermath of a successful Kickstarter crowdfunding campaign that I recently conducted to support the Beauford Delaney: Resonance of Form and Vibration of Color exhibition video documentary project, Black Women In Europe founder and editor Adrianne George asked me to share the secret of the campaign’s success. I’m happy to share the strategy that I used with BWIE readers! 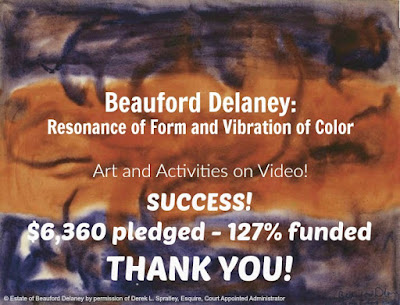 Here’s a summary of the campaign’s goals and our results:

First of all, I made up my mind that I COULD DO IT and that I WOULD SUCCEED.

Secondly, I got a coach.

Thirdly, I did what my coach advised me to do.

Here are the details:

I entrusted the strategy of the campaign to Kat Jenkins of Multitude. Kat’s subscribers and clients have an 88% success rate for conducting crowdfunding campaigns the first time around!

Kat advises that you first clarify for yourself why you’re taking the trouble to pursue your project and who your ideal backer will be.

You then create a budget for the project (which you will share on your campaign’s Web page), taking care to ask only for as much as you ACTUALLY need, and decide upon a funding goal. At this stage, you also need to determine who your existing “crowd” is and how you’re going to inform them about your project.

Only then will you look at how to increase the number of people in your crowd. If you don’t have a robust network or contact list before you begin your campaign, you’ll need to pay close attention to this step.

When you’ve gotten this far, you need to begin thinking about where and how you’re going to present your campaign. Choosing a platform (examples include Kickstarter, Crowd Rise, and GoFundMe) is a strategic decision. So is determining the length of time that you’ll run the campaign.

Because there are so many pros and cons to consider regarding your platform and the type of campaign to choose, it’s worthwhile to consult with someone who has a wide range of experience so you can make the best decision for your specific campaign.

With your platform selected, you can proceed to design your campaign’s Web page. Most successful crowdfunding campaigners include a video that succinctly explains the project, why you’re passionate about it, and how much you need to raise to make the project a success.

Be sure to pay close attention to the copy on your page, though. Your video won’t be able to present the details that many of your ideal backers will be looking for so they can make an informed decision about your project.

Then, there are the pledge amounts and rewards to consider. Most campaign platforms provide the opportunity for you to propose multiple pledge levels and to provide a reward for each of those levels. This is also a strategic process, particularly if one or more of your rewards is a tangible item that requires shipping to the backer.

You need to be prepared to communicate with your crowd throughout your campaign. If you don’t have a large crowd or if you don’t have the “right” crowd, you’ll need to focus on crowd building during the campaign as well as before your launch.

You also need to be prepared to communicate with your backers after the campaign. This is important because you want your backers to know that you’re fulfilling your commitment to deliver their rewards and that you’re making progress on the project to which they’ve just contributed. It is especially important if you plan to ask these people to fund you in the future!

Crowdfunding is not an easy way to make money. It takes planning, resources, and emotional stamina. But it is very rewarding when done well and it can serve you in ways other than fundraising. If you’re considering conducting a campaign, my advice is to:

Monique Y. Wells is the president of Les Amis de Beauford Delaney and founder and CEO of the Wells International Foundation.